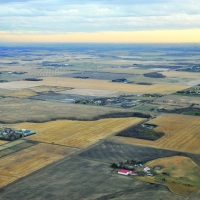 Fewer and older farmers minding the farm, who will fill their boots?

The trends of fewer operators and fewer farms show no signs of reversing and could indicate significant turnover in farm assets in the future.

In fact, our entire connection to the land is decreasing.

Twice every decade, Statistics Canada asks Canadian farmers and farm operators to complete the Census of Agriculture questionnaire. The data collected are used to give local, provincial and national snapshots of our farming industry and identify trends that need watching.

In fact, the Census of Agriculture is described as “the backbone of Canada's agricultural statistics program, which identifies the who, what, where and how of our food production.”

It is vitally important that all Canadians, including farm operators, complete the census; in fact, it's the law.

This year farm operators will be receiving letters in the mail at the beginning of May with instructions for completing the census online or on paper. The questionnaire is shorter and simpler this time and Statistics Canada has also made online completion much easier and faster.

More information on the Census of Agriculture can be found at www.census.gc.ca.